Established in 1923, we are the area’s oldest continuously functioning synagogue and the only Conservative congregation in Sullivan County.  The Congregation’s contributions to the town’s economic and cultural development were acknowledged into the state legislative record at the advent of our 75th anniversary.

Dating back to the pioneer Jewish settlers of North Lumberland, the farmer hoteliers of the “cuchalanes,” continuing through the golden days of the Borscht Belt, the 1969 Woodstock Festival, and through the subsequent years of change, the congregation has flourished and evolved. 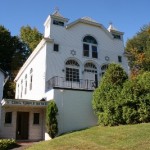